This location is labelled as CAM 07. See CAMs (disambiguation) for other CAM 07 location pages. 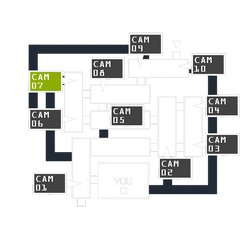 CAM 07 is a location in Five Nights at Freddy's 3 within Fazbear's Fright.

Springtrap can be seen here, appearing in either the doorway, or on the far left of the room. On rare occasions, the arcade machine will display a grunge vector-styled image of Phantom Chica's face. When this happens, exiting the camera will result in Phantom Chica's jumpscare and a ventilation error.

CAM 07 appears to be the corner of two hallways. The floor consists of the black and white checkered tiles found in the rest of the building, and two vent panels can be seen on the left and right.

To the front of the room is a large arcade machine, on top of which an image of Freddy Fazbear's face can be seen. Another arcade machine can also just barely be seen to the far left of the room with what appears to be a Foxy head on the screen.

Springtrap on CAM 07 without lights.

Springtrap on second position, lights on.

Springtrap on second position, lights off.

Phantom Chica's close-up on the arcade machine's screen (3rd version).
Add a photo to this gallery