This location is labelled as CAM 02. See CAMs (disambiguation) for other CAM 02 location pages.
Were you looking for West Hall, the first game's CAM 02, or Party Room 2, the second game's CAM 02?

CAM 02 is a location in Five Nights at Freddy's 3 within Fazbear's Fright.

Springtrap can be seen here, behind the Bonnie prop, or by the doorway in the bottom right.

CAM 02 is a hallway with an empty Bonnie suit at the end, along with posters of Freddy Fazbear, Bonnie, and Chica. The floor and sections of the walls are black-and-white and checkered, as is the rest of the building. Black tubes are visible in the top-right of the room.

CAM 02 returns in Five Nights at Freddy's: Sister Location, this time being located within the Private Room. This room leads to the right door.

Ennard goes through here in two different positions, one far back in the hallway, and the other closer, right next to the office.

This room, similar to it's predecessor, is another long, misty hallway filled with several pipes along the dirty walls. It a has black and white checkered floor, and grey-colored walls, very similar to the first game's hallways. The bottom of the walls are dark grey and black-tiled, being outlined in black. A black breaker box is located on the left wall.

Springtrap on CAM 02, with lights on.

Springtrap on CAM 02, with lights off.

Springtrap behind the Bonnie prop, with lights on.

Springtrap behind the Bonnie prop, with lights off.

Spring Bonnie appearing on a poster as a hallucination, with lights on.

Spring Bonnie appearing on a poster as a hallucination, with lights off. 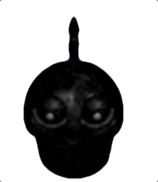 The dark-looking cupcake that appears here as well as several different cameras included CAM 02.
Add a photo to this gallery

Circus Baby approaching down the hall on CAM 02.

Nightmare Mangle approaching down the hall on CAM 02.

Nightmare Bonnie approaching down the hall on CAM 02. 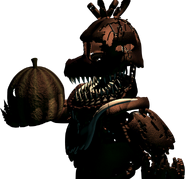 Jack-O-Chica's appearance on CAM 02.
Add a photo to this gallery