The Breaker Room is a room located on the other side of Ballora Gallery of Circus Baby's Entertainment and Rental in Five Nights at Freddy's: Sister Location. From here, the player is assigned to power up the location while fending off Funtime Freddy. This room is only accessible on Night 2.

The Breaker Room is noticeably smaller than the rest of the rooms. It contains several wires and pipes, nearly covering the entire point of view. To the left, contains a poster of Funtime Foxy with the words, "PARTY TIME!". The right corner of the room contains Funtime Freddy upon a stage.

After failing to shock Circus Baby and warding off the Bidybabs, HandUnit will direct the player to the Breaker Room to attend to the task of manually restarting the system. To reach it, the player must return to the Primary Control Module and crawl through Ballora Gallery. The player must then interact with a control panel inside the Breaker Room to restart the systems. However, doing so will agitate Funtime Freddy, who is lurking nearby. The player is supplied with voice clips called "Mascot Response Audio" to be used to soothe him and stave off attack. Once the task is complete, the player will never have to come back to the Breaker Room again.

The Breaker Room appears as the location for one of the puzzles in the "Vent Repair: Ennard" level, in which the Player must activate the breaker switches in a specific order by following the cables connected to the switches themselves. Should the player flip an incorrect switch, the active switches will deactivate, forcing the player to start over. After all of the switches in the first two areas are activated, Ennard becomes active. After the 3rd puzzle is completed, Ennard suddenly appears, and attempts to force the door open as it is closing, only to be shut out. In the Blacklight mode version of the level, Springtrap briefly appears as a threat in the second section, crawling towards the player at a relatively quick pace, reducing the time given to solve the puzzle. 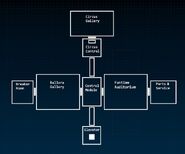 The Breaker Room (far left) on the map of Circus Baby's Entertainment and Rental.

The map of the location as seen on the Breaker Panel. 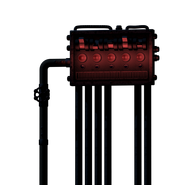 The set of buttons.

The view of the Breaker Room from Ballora Gallery.

A sprite that says "ONLINE" when the power has been rebooted. 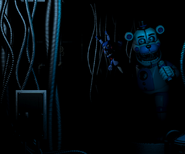 The Breaker Room in the Extras.

The restart icon from the Breaker Room panel, without the numbers.

The numbers from the Breaker Room panel.

The Circus Control text from the Breaker room Map

The Circus Control text from the Breaker room Map

The Elevators text from the breaker room map, possibly hinting there's more than one elevator active.

A view of the vent.

One-frame of Ennard making an appearance.

Ennard giving the player a small jumpscare (click to animate).

The vent repair in blacklight version.

Ennard's jumpscare in the vent repair (click to animate).