Bonnet is a hand puppet-like rabbit animatronic who first appeared in the Custom Night Mode add-on of Five Nights at Freddy's: Sister Location. Being a reskin, she uses the same model as Bon-Bon, albeit with a pink motif.

Beside looking identical to Bon-Bon, Bonnet is pink rather than blue with lighter accents from her muzzle, paws, stomach, and insides of her ears. Like Bon-Bon, she has a black button on the middle of her chest. She has slight salmon-colored blushes on her cheeks and her bowtie, rather than ordinary red in color. She also has green eyes rather than magenta eyes like Bon-Bon.

The main reason being colored in pink is due to her opposite gender.

As evident by her only quote in Custom Night mode, in Five Nights at Freddy's: Sister Location, she appears to be easily attached, possibly clingy. It may also suggest that it is lonely without someone to handle her, in the same fashion that Funtime Freddy does with Bon-Bon.

Bonnet only appears in the Custom Night. Bonnet can randomly appear on the right side of the Office after lowering the Monitor, walking quickly to the left while focusing her eyes on the player and giggling as well. When encountered, the player must click on her nose in order to prevent her from attacking them, causing her to "deactivate" by comically falling over while covering her face. Otherwise, if not clicked before Bonnet ends her walk on the left side, she will duck out of sight, then instantly jumpscare the player, sending them back to the Custom Night screen.

Night modes where Bonnet is active are listed as follows:

Bonnet reappears in Ultimate Custom Night as one of the several non-selectable characers summoned by Dee Dee.

After being summoned by Dee Dee, Bonnet will appear in the Office at the start of the screen's right side, then walking across the screen while giggling. The player is required to click on her nose to make her go away. If Bonnet reaches the end of the left side, she will jumpscare to give the player a game over.

Bonnet appears once in Funtime Freddy's level from the Night Terrors mode. In the level, she pops out from the dresser shelves on common occasions. The player must shine their flashlight on her to repel her, or else she will jumpscare the player, but this jumpscare serves merely as a distraction.

Bonnet running across the Office, animated.

Bonnet falling, animated.
Add a photo to this gallery

Bonnet as she's introduced in Ultimate Custom Night's menu teaser.
Add a photo to this gallery

Bonnet in one of the screenshots. 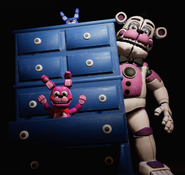 Bonnet with Funtime Freddy and Bon-Bon in the gallery.

The cutout of Bonnet in the drawer (front).

Bonnet emerging from the drawer in the files (click to animate). 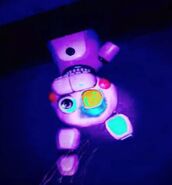 Withered Bonnet in the Ennard's Vent Repair level with a Faz-coin in her eye socket.
Add a photo to this gallery

Retrieved from "https://freddy-fazbears-pizza.fandom.com/wiki/Bonnet?oldid=3286765"
Community content is available under CC-BY-SA unless otherwise noted.