Were you looking for Bidybab's counterpart, Electrobab, or her version from the Novel?

The Bidybabs are a pair of small animatronics and one of the antagonists in Five Nights at Freddy's: Sister Location. The duo are only active during Night 2 and one in the Custom Night.

The duo appear on stage from the Circus Gallery with Circus Baby.

The Bidybabs are small, baby-like animatronics with a pale tan colored exterior. Each of the two have different colored eyes - one has light-purple eyes, and the other has blue-green eyes. They feature a triangular-shaped orange nose, squarish teeth in a similar style of a classic nutcracker, an orange-colored lower lip and eyelids, five-fingered hands, smaller ears, and a single metal button in the middle of their chest. They seem to wear light-brown, vest-like shirts and shorts. They are also barefoot.

Bidybabs talk in a feminine, quiet voice never raised using a southeastern British accent, but is only raised in the Custom Night Mode once defeated.

the Bidybabs all share the same personality. The Bidybabs mainly exhibit cunning and sociopathic tendencies as evident by their dialogue in Night 2 during the events of Five Nights at Freddy's: Sister Location. they also exhibit childish behavior as well, as evident by its frustration as heard in custom night, when shut out of the air vent of the Private Room, as well as its uncharacteristically loud pouting at the end of one of the Custom Night Mode settings, both instances in the same mode.

Bidybab with light-purple eyes is only active in Circus Gallery on Night 2. While the HandUnit is rebooting the power to Circus Baby's Entertainment and Rental, the player must hide under the desk until the power is restored. While under the desk, Bidybab will enter the room and proceed to look underneath, peering through the holes that riddle the door that protects the player. After she does that, Bidybab will attempt to pry open the door and pull it open to get inside. The player's job is to try and hold the door shut to keep the enemy out. If the player fails to keep the door shut, Bidybab's jumpscare will trigger, resulting in a game over.

Night modes where Bidybab is active are listed as follows:

While Bidybab does not appear in Ultimate Custom Night as one of the selectable characters or Dee Dee's spawns, she appears in the Sister Location stylized Office skin as one of the environmental decorations.

Bidybab makes a brief cameo in Five Nights at Freddy's VR: Help Wanted in Circus Baby's level during the Night Terrors game mode. Also, some of Bidybab's dialogue can be heard during Funtime Freddy's Night Terrors level for reasons unknown.

Bidybab looking through the holes from the desk.

The same image, but in a different lighting. This is used rarely for during one of the house cutscenes while watching "Immortal and the Restless".

Bidybab in the elevator Easter egg.
Add a photo to this gallery

Bidybab's third and final view in the Private Room vent.
Add a photo to this gallery

Bidybab from the fourth teaser.

Bidybab from the fourth teaser, brightened. Baby's face can be seen in the upper right-hand corner.

Bidybab appearing in the teaser for the game's update.
Add a photo to this gallery 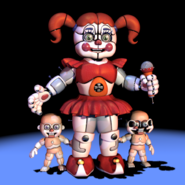 Two Bidybabs together with Circus Baby from the Extra menu.

Bidybab's poster as shown in the Custom Night menu. 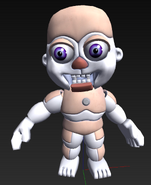 A view of Bidybab's model in Five Nights at Freddy's VR: Help Wanted!

3D Render of Bidybab from Five Nights at Freddy’s VR: Help Wanted
Add a photo to this gallery

Bidybab's lines all occur when hidden under the desk in Night 2.

Retrieved from "https://freddy-fazbears-pizza.fandom.com/wiki/Bidybab?oldid=3265659"
Community content is available under CC-BY-SA unless otherwise noted.