Not what you were looking for? See BB (disambiguation).

Balloon Boy is a human-like animatronic with a round body, peach-colored skin, large blue eyes, an orange triangular nose, red-brown hair, and a toothy grin. Like the other new animatronics, he has blushed cheeks, which are colored rosy red.

He wears a red and blue vertically striped shirt with two black buttons down the middle. The propeller cap he wears also bears the same pattern. He wears blue pants and simple, brown shoes. His arms are stubby and thin with fingerless, round hands. In his right hand, he holds a large, red and yellow striped balloon, and in his left hand, he holds a rectangular sign that reads "Balloons!".

Suggested by the few utterances by Balloon Boy throughout the course of the franchise, he seems to be a shy sort of character, looking cheerful judging by his laughter. One of the game over screens in Five Nights at Freddy's VR: Help Wanted describes him as something of a prankster.

BB is completely inactive on Night 1, as he does not become active until Night 2. He starts in the Game Area and will eventually come to the Office via the Left Air Vent. With each of his movements, the player can hear him saying "Hello," "Hi," or simply giggling. BB will not show up on any cameras except the Game Area and the Left Air Vent, keeping his path of approach hidden.

Balloon Boy (other than some of the easter eggs like Shadow Freddy) is the only animatronic in the game that will not kill the night guard, but rather he will make an annoyance of himself by disabling the Flashlight and Air Vent Lights all while a sound loop of him laughing will play until the player is killed or gets to 6am. If this occurs, the player is especially vulnerable to Withered Foxy's attack, as he can no longer be stunned with the now disabled Flashlight. To prevent Balloon Boy from fully entering the office, the player must put the Freddy Fazbear Head on while BB is in the Left Air Vent, and wait for the sound cue that he has exited the vent. However, the player should be advised that the noise heard may possibly be another animatronic entering or exiting the Office or vents. Once BB has left the vent, he will return to the Game Area, and his cycle will repeat. If the player instead pulls up the monitor while BB is still in the vent, he will enter the Office. Balloon Boy will remain in the Office for the rest of the night, rendering it nearly impossible to beat unless it is close enough to 6 AM or Foxy's AI is set to 0 on the Custom Night.

From the Custom Night, night modes where BB is active are listed as follows:

The real BB's disembodied, deactivated head appears in the trash can along with the remains of the other toy animatronics. The head's appearance does not affect gameplay and is only there for aesthetic purposes.

The audio system players use to ward away Springtrap is actually BB's voice box, which is the biggest role BB plays besides his head and minigame appearance. Drawings of BB can also be seen on CAM 03 and CAM 08.

BB's most important appearance is in the minigame "BB's Air Adventure". The player can access this minigame at any time on any night, by going to CAM 08 and double-clicking the drawing of BB on the wall.

In this minigame, the player (playing as BB) must collect eight red balloons scattered throughout a map. Seven can be collected by simply walking to the right, and upon doing this, an exit door will appear. Touching said door will end the minigame, or the player can continue the minigame, as instructed below.

Once the first seven balloons are collected, the player can jump out of an invisible exit at the top left corner of the room. Once the player does this, they will fall to a black-and-white area, until they hit the ground, in which case they can proceed to the right to discover another "room" with a color-changing balloon. The player must touch this balloon to end the minigame.

Once the player acquires the birthday cake from the minigame Mangle's Quest on Night 2, they must return to BB's Air Adventure. They must collect the seven balloons again, jump through the invisible hole again, land on the red balloon platforms, and walk over to a seemingly-deceased child. Approaching the child will cause a large cake to appear. The child will stop crying, look up at BB, and the minigame will abruptly end. This unlocks one of the children in the Happiest Day minigame.

BB in his FNaF World self appears in few minigames such as "Gravity Vortex", "Lemonade Clown" and "Fruit Punch Clown".

Balloon Boy returns in Ultimate Custom Night as one of the many selectable characters.

Unlike other animatronics in the vents, BB will try to sneak in through the side vent. The player needs to close the side vent and wait until they hear a thud indicating he is gone. If BB slips in, he will disable their flashlight. After about 10 seconds, he will disappear, allowing the player to once again use the flashlight. The challenges in which BB is present are as follows:

BB returns in Five Nights at Freddy's VR: Help Wanted, in the FNAF 2 levels. His behavior remains the same, when he's in the vent, the player must put on the Freddy Fazbear Mask to ward him off or else he will enter the Office and disable the lights, leaving the player vulnerable to Foxy.

He also appears in the Curse of Dreadbear DLC, as one of the animatronics in the Trick or Treat level.

BB returns in Five Nights at Freddy's AR: Special Delivery. Like all other animatronics in this game, Balloon Boy is hostile, will directly attack the player with a jumpscare, unlike his previous incarnations. He will start by making his original quotes, like "Hi" and "Hello", as well as his laugh. Balloon Boy is harder than some of the other animatronics because he does not make clinking sounds when walking around. To tell where BB is, he makes sounds similar to blowing a balloon, and while rushing the player the sound of the balloon deflating can be heard. The player must look down to be able to spot Balloon Boy as he is shorter than all the other animatronics and thus, will only be spotted when looking down.

The Game Area with the lights off.

BB in the Game Area.

Toy Freddy in the Game Area with BB.

BB in the Game Area with Mangle.

BB in the Left Air Vent.

BB looking into the Office from the vent.

BB in the Office.

Golden Freddy and BB can be seen in the Office together on rare occasions.
Add a photo to this gallery

BB in the Game Area, brightened.
Add a photo to this gallery

A figure of BB. This figure can be obtained by completing the 'Night of Misfits' preset on the Custom Night.

BB's mugshot from the Custom Night screen.
Add a photo to this gallery 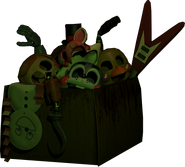 BB's head as partly seen in the box.

BB's head and his paper doll in the box from the Office.
Add a photo to this gallery

Dark-version of BB streaming with tears in "BB's Air Adventure" minigame.
Add a photo to this gallery

BB and his paper doll appear to be scrapped along with Foxy, Toy Bonnie, Toy Freddy, Toy Chica, and Mangle in Five Nights at Freddy's 3's second teaser.
Add a photo to this gallery 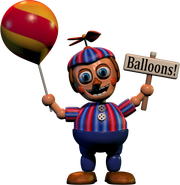 BB as he appears in the Office. 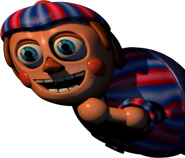 BB's full vent texture.
Add a photo to this gallery 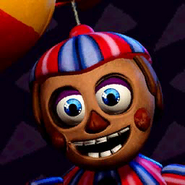 BB in the gallery. 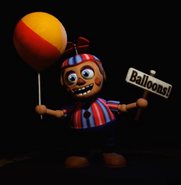 BB in the gallery (front). 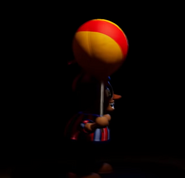 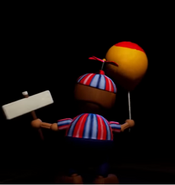 Ditto (back).
Add a photo to this gallery

BB running out of the office, animated.

Balloon Boy running away in the files, animated. 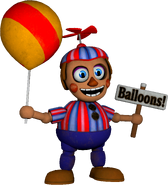 Balloon Boy in the Workshop, animated. 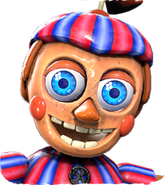 BB's icon in the Workshop. 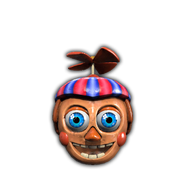 BB's icon while roaming on the map. 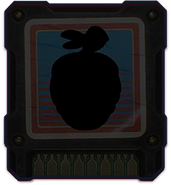 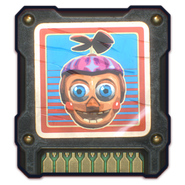 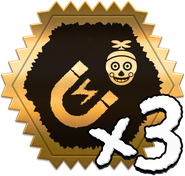 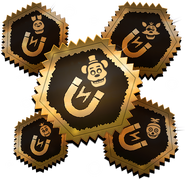 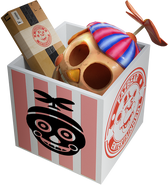 BB as seen outside the house, along with Bonnie, Freddy, Foxy, and Chica.
Add a photo to this gallery

BB, featured with all (excluding the phantoms and shadows) of the other animatronics throughout four previous installments of the Five Nights at Freddy's franchise.

BB in the Five Nights at Freddy's AR: Special Delivery celebration image for Thanksgiving.
Add a photo to this gallery 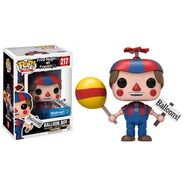 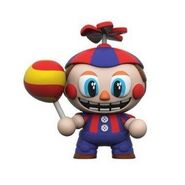 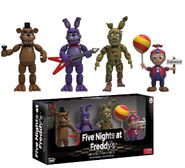 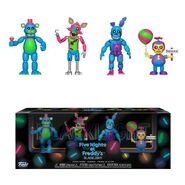 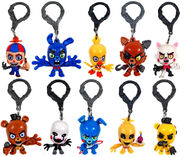 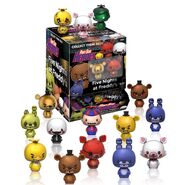 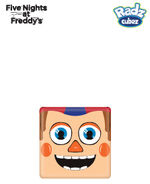 Radz Cubez
Add a photo to this gallery