Were you looking for Parts/Service from the second game or CAM 05, a camera sharing the number of Backstage from the third game? 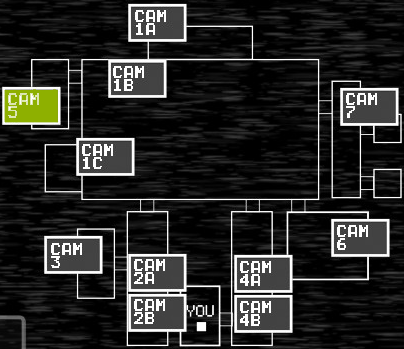 The Backstage is a location in Five Nights at Freddy's within Freddy Fazbear's Pizza. It contains spare parts for the animatronics, should they happen to break during the day.

Bonnie may sometimes appear here as he makes his way towards The Office. Occasionally, he will stare directly into the camera with small, white pupils replacing his eyes.

The Backstage is a small room located to the left of the Show Stage, used to store spare animatronic parts. The room consists of a checkered, white-and-black tiled floor and a small table, on which sits an endoskeleton and an extra Bonnie head.

To the back and left of the room sits a shelf, holding three spare Bonnie heads, two of Chica's, and three of Freddy Fazbear's. An open door can be seen on the right wall, with a sign that says "EMPLOYEES ONLY" above it. Wires hang loosely from the ceiling to the right of the camera.

Upon receiving a Game Over after getting caught by the animatronics, a brighter image of the Backstage will be displayed, featuring a Freddy Fazbear costume taking place of the endoskeleton, with eyeballs loosely hanging from the empty eye sockets and teeth peeking out through the mouth. This implies if not outright confirms, that the player was killed by being forcibly stuffed inside the suit. The words Game Over are displayed on the bottom-right corner of the picture.

All of the animatronic heads as well as the endoskeleton staring at the camera.

Bonnie's close-up, staring directly into the camera.
Add a photo to this gallery

Backstage brightened and saturated for clarity.

All of the animatronic heads as well as the endoskeleton staring at the camera brightened and saturated for clarity.

Game Over scene (barred "Game Over"), brightened.
Add a photo to this gallery 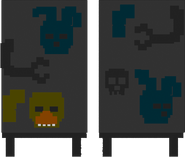 The Backstage table with scattered remains of Chica and Bonnie in the end-of-night minigames from Five Nights at Freddy's 3.
Add a photo to this gallery

The models of the backstage released for the 3rd Five Nights at Freddy's anniversary.
Add a photo to this gallery