The Aztec animatronics are animatronic skins in Five Nights at Freddy's AR: Special Delivery, based on the elements of the Aztec culture.

Only two animatronic skins are available, introduced for the Ancient Equinox Event, which started on March 5, 2021. 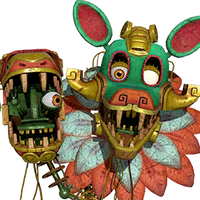 Serpent Mangle is Mangle's Aztec skin available on March 5, 2021 for the Ancient Equinox Event. They are Mangle's second animatronic skin, after Magician Mangle in the Dark Circus Event.

Serpent Mangle has green coloring on their head and hands. Their endoskeleton arms and legs are laced with red, green and yellow components. Serpent Mangle has wooden brown teeth, golden brick on their cheeks and around their snout and a giant dahlia flower with orange and white petals around their neck. Their feet are mismatched in color, with their left foot being clothed in a green more organic looking foot, while the right foot is the same golden yellow as the rest of its body. There is also a big bushy tail behind his back with the same orange and white color scheme. Their left eye is a regular one with a glowing yellow retina, and their right eye is entirely orange, similar to the sun. Mangle's second head is inside the mouth of a fake dragon head. The second head, as usual, has Serpent Mangle's right eye. Serpent Mangle carries miniature versions of both the sun and the moon, with the tiny sun giving off a small glow of light. 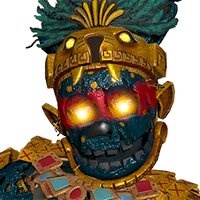 The Curse is an Aztec warrior. He has a golden helmet that has green shrubbery above it alongside his green rabbit ears, with the front having a realistic depiction of the eyes and snout of a lion. The Curse has green skin, although the part of his face around his eyes are red, and the eyes themselves glow a searing yellow. He wears golden pauldrons checked with red Xs in the center of each square to cover his shoulders. He also has a golden necklace with a plate filled with red and blue gems. His left arm and legs are painted an orange-yellow hue with black stripes that resemble a tiger, while his right arm is holding a grey, circular Aztec shield that's cracked. The Curse's right hand is made entirely of feathers, dyed to have a green, yellow and red striped pattern. The Curse wears a green leaf skirt on his midsection, while a circular golden medal sits in the center of his chest. This medallion is also the symbol of the event.