The arcade animatronics are video game-themed animatronics who appeared in Five Nights at Freddy's AR: Special Delivery. While a majority of animatronics were reskins, the event concluded with the release of 8-Bit Baby; a new, separate character. They were first introduced for the Arcade Mayhem Event that started on May 7, 2020.

The animatronics have a capability to switch between two different forms, excluding System Error Toy Bonnie. 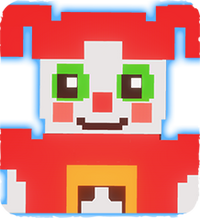 8-Bit Baby's appearance is heavily based on Circus Baby's minigame appearance from Sister Location but has green eyes to reference Elizabeth Afton's soul taking over Circus Baby. In her workshop mode, the eyes tend to glow a luminescent green.

All of the arcade animatronics behave identically to their original counterparts, except they are more aggressive and give less time for actions to be done to them. 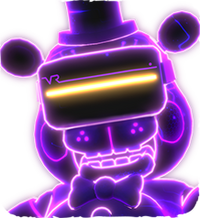 VR Toy Freddy is a version of Toy Freddy and the first arcade animatronic skin released on May 7, 2020. He is Toy Freddy's first official skin.

In his Workshop mode, his appearance glows with dark purple and black neon color, which also applies to his hat, bowtie, buttons, and microphone. He is textured with few cyber-styled circuit lines and wears a virtual-reality headset. 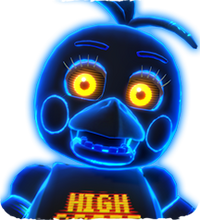 Highscore Toy Chica is a version of Toy Chica and the second arcade animatronic skin released on May 14, 2020. She is Toy Chica's first skin.

In her Workshop mode, her appearance is pitch-black in color with glowing blue aura effects, and she sports orange/yellow irises. Her forearms appear more bluer and contain poly-count textures. The "LET'S PARTY!" text for her bib is replaced by "HIGH SCORE" in a pixelated font.

In her attack mode, called Game-Over Toy Chica, her glowing blue aura effect changed into purple and red. Her eyeballs are removed to reveal red lens-like sclera, and her bib text has now changed into "GAME OVER". Her beak is also removed, similar to her original counterpart. Highscore Toy Chica's cupcake, 8-Bit Cupcake, resembles Toy Cupcake but based on an 8-bit sprite and appears full 2D in design. 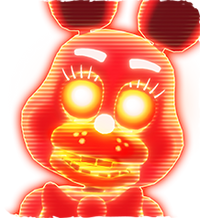 System Error Toy Bonnie is a version of Toy Bonnie and the third and last arcade animatronic skin released on May 21, 2020. He is Toy Bonnie's first skin.

System Error Toy Bonnie's general color (including his bowtie) is a mix of orange and hot reddish-pink, and textured with scanlines all over him. His mouth and eyes gleam yellow, a red "SYSTEM ERROR" text printed on his stomach, and glowing white eyebrows, freckle spots, and a nose. His whole body also emits pixel-like particles.

Unlike the other arcade animatronics, System Error Toy Bonnie has only one form.