This is a list of official anniversaries celebrated for special events, like announcements for the upcoming game, the future of the franchise, behind-the-scenes, etc. The official anniversary date is August 8th, the same date on which the first game was released.

On Scott Cawthon's website, he replaced the "The End?" image with the appreciation image showcasing all of the recurring animatronic characters from the first four games, barring JJ, Shadow Freddy and RWQFSFASXC, all six phantoms, and all nightmare animatronics from the fourth game's Halloween Edition. (However, note that Halloween Edition wasn't out at the time, thus explaining the lack of its characters.)

Once every hour, Scott released a series of screenshots at his website to show points in development of the character models and some of their jumpscares.

Like last year, Scott uploaded another series of screenshots at his site. Some screenshots display hidden images of characters to promote the incoming release of Freddy Fazbear's Pizzeria Simulator.

Dawko, one of the notable YouTubers associated with Scott Cawthon, uploads an official interview with Scott Cawthon, who answered questions regarding the previous games, theories, the movie's current development, his past animation works, how his family was doing, his birthday, and the future of the Five Nights at Freddy's franchise.

Scott uploads a promotional image at his website to tease the next installment - Five Nights at Freddy's: Security Breach. 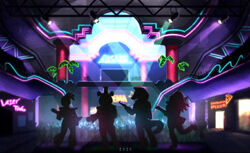 Note: The PlayStation 4, Xbox One, and Nintendo Switch console ports for the first seven games of the series were first originally intended to come out for this anniversary but were delayed.

Dawko's brand, Hex, revealed that their line of FNaF plushies is coming soon.[2]

The Help Wanted game's official anniversary is May 28th.

On May 28th, 2020, Steel Wool Studios released their artwork to celebrate the 1st anniversary.[4]

On May 28th, 2021, Steel Wool Studios released their artwork to celebrate the 2nd anniversary.[5] 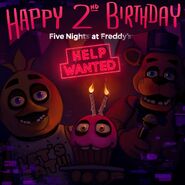 On November 25th, 2020, to celebrate the 1st anniversary, a batch of several anniversary products are released to the official online store.[6] The anniversary's merchandise image shows all of the animatronics as well as their skins (excluding the forest animatronics and onwards). 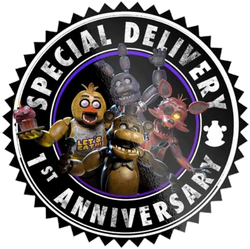