All of the animatronics in the game utilize the same mechanics. It is also possible to obtain a Plush Suit for each of them which can be placed on an endoskeleton and used as a cosmetic while salvaging or attacking other players, or a CPU for each of them to make endoskeletons behave and sound like them when sent out to attack others (except for Endo-01, which is considered the default, and RWQFSFASXC, which does not appear through normal circumstances).

Endo-01, or Bare Endo, as referred to in-game, is the first animatronic encountered after Freddy and the base form of any collected ones. When attacking, no speaking or noises will be heard, only footsteps. As the base form of the animatronics, he is the standard enemy and can simply be defeated through typical procedures, but has no unique noises or behavior to identify him by. To find and shock him, the player must find the static, use sound to listen to his movement, look at him while he is rushing, avoid him while going haywire and finally shock him when he uncloaks. He does not go haywire often and frequently decloaks at the very first rush. Endoskeletons are earned and unlocked in the workshop at streaks of 1, 5, 9 and 13.

Freddy Fazbear is the first animatronic the player will encounter, as part of the tutorial. While attacking, Freddy will play the Toreador March and speak to the player. To defeat him, the player must listen for him and watch his movements, and, after he decloaks, give him a Controlled Shock. Freddy is significantly easier than most of the other animatronics because his static is much more visible, making it easier to track him. His signature music also gives away his identity with relative ease.

Bonnie will start to make moaning sounds and then attack the player. Just like most of the other animatronics, the player can only attack Bonnie when he decloaks while charging at the player. Interestingly enough, Bonnie makes a loud voltage sound when roaming around, giving him away as he is the only animatronic to make the sound. Bonnie also seems harder than Freddy, Foxy, and Chica as he goes Haywire more often and fakes-out a rush frequently. Bonnie’s clinking sounds when moving is louder than most animatronics, making other sounds harder to hear.

Chica acts incredibly similar to Bonnie, as they do in most games they both appear in. She will make moaning noises at the start identical to Bonnie's, and then footsteps will be heard and static will be visible. Chica will eventually rush at the player from where the static presides from most. While Chica does not have any unique noises as she shares hers with some of Bonnie's, she is easily given away by the second pair of glowing eyes belonging to her Cupcake that are visible while she is rushing. She, like all the other animatronics, can only be attacked once she fully uncloaks. Chica is also noticeably easier than Bonnie when stalking the player, with less frequent haywires.

Foxy follows an attack pattern similar to Freddy, Chica, Bonnie, and Endo, but is somewhat harder because of the fact that his static doesn't stay in one place, as he runs around the player while cloaked and in the roaming stage of his attack. Like all of the other animatronics, it's important to wait patiently until he approaches the player and decloaks, which is when the player should shock him. Foxy will sometimes talk to the player, but can still go haywire in the middle of his sentence. The player must look away when they see Foxy go haywire, as looking to long at him or shocking him will result in an immediate jumpscare. Foxy also can rush at the player multiple times in a row, so just because Foxy has rushed once doesn't mean that he won't instantly rush at the player again.

The Radioactive Foxy and Ringmaster Foxy skin behaves the same way. Being event characters, however, they can't be encountered on the map like regular Foxy. They can only be lured or sent to/from other players.

As the first of the Toy animatronics introduced, Toy Chica introduces new mechanics that may trip up players expecting other animatronics' behavior. When moving around, she will make footstep noises instead of clinking due to being less robotic, and will also sometimes speak condescendingly to the player. Being a mid-level animatronic, her static is slightly difficult to see. Unlike the other animatronics, however, looking away when she goes haywire does nothing and the player must instead put on the Freddy Fazbear Mask (only available when facing Toy animatronics) to ward her off. As such, her haywire is encountered somewhat frequently. She is still defeated through the normal mechanics of rushing, decloaking and shocking her.

Toy Bonnie combines both Toy Chica's and Springtrap's mechanics. The player must wear the Freddy Fazbear Mask when he haywires, but they must pay attention to his eye color as well when haywiring. If his eyes are red, the player must look away while still wearing the mask. If his eyes are white, the player must look at him with the mask on until they're red, then look away while still wearing the mask. He is still defeated through the normal mechanics of rushing, decloaking and shocking him.

The VR Toy Freddy skin behaves the same way. Both regular Toy Freddy and VR Toy Freddy are currently event-exclusive characters, thus aren't normally encountered on the map. They can only be lured or sent to/from other players.

When dealing with Mangle, the shocker is removed, so the player must take very specific actions during the encounter. Throughout it's visit, Mangle will drop pieces of itself, forcing the player to find the pieces within a few seconds, or else they'll get attacked. When haywiring, the player must look at Mangle until it's eyes glow yellow before putting on the Freddy Fazbear Mask and looking away. The player must also wear the mask whenever Mangle charges. Once enough pieces have been collected, Mangle will charge at the player and get automatically shocked.

Both Mangle and Magician Mangle are currently event-exclusive characters, thus can't be normally encountered on the map. They can only be lured or sent to/from other players.

Like all other animatronics in this game, Balloon Boy is hostile, will directly attack the player and has a jumpscare, unlike his previous incarnations. He will start by making his original quotes, like "Hi" and "Hello", as well as his laugh. Balloon Boy is harder than some of the other animatronics because he does not make clinking sounds when walking around. To tell where BB is, he makes sounds similar to blowing a balloon, and while rushing the player the sound of the balloon deflating can be heard. The player must look down to be able to spot Balloon Boy as he is shorter than all the other animatronics and thus, will only be spotted when looking down.

RWQFSFASXC can appear in AR Mode by collecting too much Shadow Remnant. His appearance is heralded by a slightly distorted doorbell chime. He will randomly appear around the player and can be tracked through vibration, similar to Light Remnants. After appearing, he will slowly approach the player. To stop him, the player must shine their Flashlight on him until he disappears. He will then reappear randomly around the player, requiring them to shine the Flashlight on him again. Repeating this several times will fend him off completely, earning the player Remnants and increasing their streak. This takes longer to do at higher streak as Shadow Bonnie seems to have more "Health Points". Unlike other animatronics, losing to RWQFSFASXC causes the player to lose a much larger amount of Remnants than normal, likely due to the fact that he is summoned if the player is too risky in Remnant Collection. Shadow Bonnie does not have an obtainable Plush Suit or CPU.

Baby is the second hardest and rarest animatronic to find and defeat. She starts by moving swiftly around, speaking to the player. Her haywire is encountered frequently. She also grunts loudly when attacking the player, but her clinking is quiet, making it harder to detect when she is moving. She decloaks somewhat frequently.

The Broiler Baby skin behaves the same way. Being an event character, however, Broiler Baby can't be encountered on the map like regular Baby. She can only be lured or sent to/from other players.

Freddy Frostbear makes his debut in Five Nights at Freddy's AR for Christmas. He is a frozen version of Freddy. He functions in almost the same way as Freddy Fazbear with three differences - He doesn't speak to the player, he is noticeably more difficult, and static doesn't show up. In replace of static, his special ability is to freeze the screen, which disables the ability to use the controlled shock button. To counter the frozen screen, the player must shake their device for the frost to wither away. To defeat Frostbear, the player must simply catch him and shock him as per usual.

8-Bit Baby behaves much more aggressively than Circus Baby, sharing an altered version of her mechanics. Like Baby, she decloaks and haywires frequently, but her higher dificculty makes her quicker to attack. She's a lot noisier than Baby, blaring out 8-Bit sound effects often and playing the Sister Location Death Minigame's music in the background during the whole encounter. 8-Bit Baby explodes after an encounter.

Like Mangle, Ballora is not required with the shocker, instead she acts seemingly different from the other animatronics. Two meters replace the shock button. The left one shows how close Ballora is, while the right shows how much noise the player makes. The player must stay neutral between the two meters. If either one goes up, Ballora will attack the player. During gameplay, the Minireenas will climb up and block the player's view, the player must shake the device for them to fall off, although this can be risky, as the shaking will trigger the meters. After some time, the Minireenas will become inactive, with the player collecting them. Once collected, Ballora will charge and get automatically shocked.

Freddy in the Workshop

Bonnie in the Workshop

Chica in the Workshop

Foxy in the Workshop

Bare Endo in the Workshop 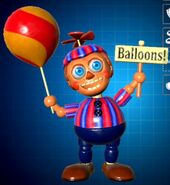 BB in the Workshop

Circus Baby in the Workshop

Toy Chica in the Workshop

Toy Bonnie in the Workshop.
Add a photo to this gallery

Freddy Frostbear in the Workshop.

Toy Freddy in the Workshop.

Mangle in the Workshop.

8-Bit Baby in the Workshop.

Ballora In the Workshop
Add a photo to this gallery

Shamrock Freddy in the Workshop.

Chocolate Bonnie in the Workshop.

Easter Bonnie in the Workshop.

VR Toy Freddy in the Workshop. 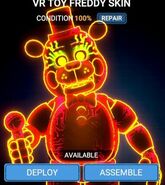 VR Toy Freddy, as he appears for a split second when selected in the Workshop.

Highscore Toy Chica in the Workshop.

Highscore Toy Chica, as she appears for a split second when selected in the Workshop.

Radioactive Foxy in the Workshop.

Toxic Springtrap in the Workshop.

Firework Freddy in the Workshop.

Liberty Chica in the Workshop.

Flamethrower Endo in the Workshop

Broiler Baby in the Workshop

Scorching Chica in The Workshop

Flaming Springtrap In The Workshop
Add a photo to this gallery