Not what you were looking for? See the book of the same name.

Room for One More

Delilah wakes up at 6:25 a.m., missing her six to two-shift at the diner. To take her mind off work, she browses a local garage sale, where she finds Ella. She reminds her of the child she always wanted. She purchases Ella because one of her functions was an alarm clock, and she sets an alarm for 1:35 p.m.

She wakes up late at 2:25 p.m. Disappointed that Ella's alarm didn't work, she throws her away in a dumpster.

Delilah suddenly wakes up at 1:35 a.m. She reasons that she accidentally set the alarm on Ella wrong. The next day, she wakes up again at the same time to hear whispering. She tries to find Ella to turn the alarm off, but she cannot find her.

The next few weeks she is forcibly awoken at 1:35 a.m. She hears tapping at her window, something crawling under her bed, and an intense feeling of being watched. She hears rustling sounds in her closet, tapping under the floor, and small footsteps. She dreads going to sleep, knowing that she would be awakened by Ella.

She drives away from her town, thinking that Ella wouldn't be able to follow. Her plan is not successful, and Ella's attacks grow in intensity. In an act of desperation, she runs into an abandoned construction site and gets into a vent opening. She crawls deeper into the vent until she was stuck. She relaxes, knowing that she'll never have to run from Ella again. 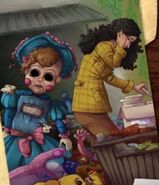 The story's image in The Ultimate Guide.
Community content is available under CC-BY-SA unless otherwise noted.
Advertisement